The One Death & Dismemberment Table to Rule Them All

After spending many a scraped together spare minute over the last few months I've finally finished The One Death & Dismemberment Table to Rule Them All (TODADTTRTA). 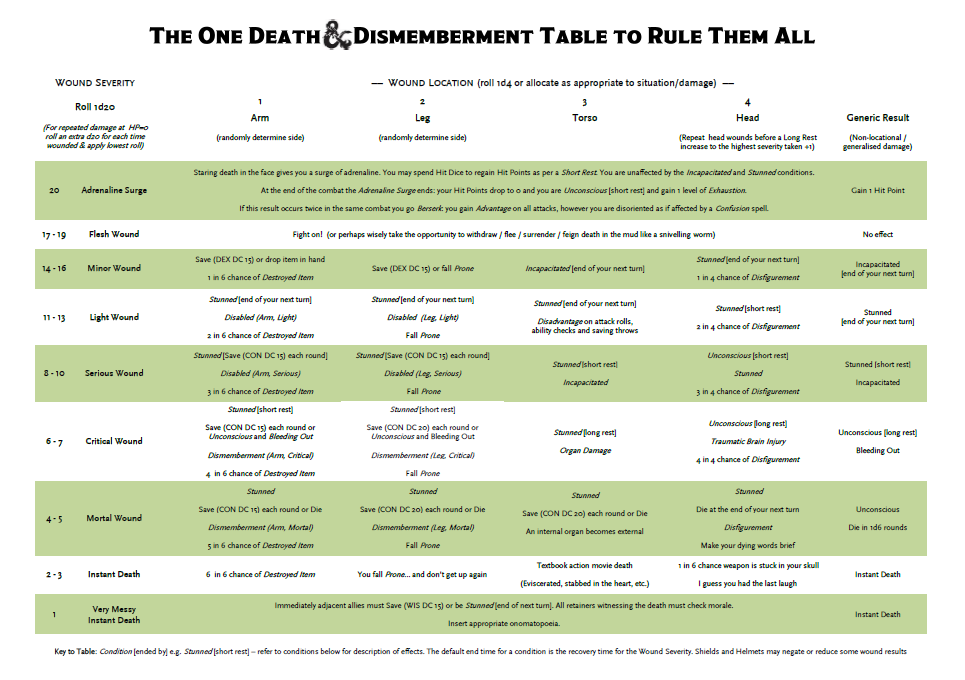 Thanks go out to the authors of the many fine Death & Dismemberment tables abounding the interwebs, I have riffed and ripped off mightily from lots of you (consider the honour roll in previous posts as a pretty clear reference list. If any folks feel like I have overstepped the mark please let me know and I'm happy to give more overt credit or remove offending items). The version linked is a .pdf, however if you would like a word version to tinker with for yourself please drop me a line.

If you are unfamiliar with the concept of the Death and Dismemberment Table, I'll direct you to some recent posts detailing what they are and some good examples of tables available online, and a brief analysis of some design issues I considered in putting TODADTTRA together.  If that's too much work, the short story is: instead of the usual process for resolving what happens when PC's hit points are reduced to zero you roll on the table to decide your fate and may be spared for a while longer, accrue permanent injuries or be killed.

Ok, so how did it turn out?

I'd love to hear any comments on how TODADTTRTA has turned out, or feedback if anyone happens to use it in play.