I've come across mention of Tom Moldvay's Challenges Game System a couple of times lately. Essentially it was an ultra compact summary of the AD&D ruleset with a few unique tweaks. Of particular interest, whilst the combat system was more or less standard D&D roll against AC, it featured extra results based on the degree of success or failure. This can result in extra hit point damage inflicted, varying wound states which result in penalties until healed, partial damage for near misses, or even lost initiative or missed actions depending on how much the required to-hit total is made or missed by. My two favourite RPG's are B/X D&D and Rolemaster so yeah, colour me interested. 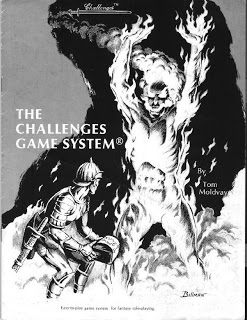 Last week there was a couple of entries about the Challenges combat system at Lost Pages, where Paolo put the results for degrees of success and failure into table form, and this weekend Jeff Rients also had a crack at it too.

One thing that immediately stood out to me on looking at Paolo's tables was that this system would work really well alongside Delta's Target 20 algorithm - because it uses a static target number (20!) to determine a successful hit, degrees of success and failure could also be mapped to specific attack totals. This would enable a single attack table with results for attack totals from 10 to 30. A single look at the table would tell everything you need to know and the number of results is small enough that most results would become familiar over time making the table just  back up. I only saw Jeff Rients' table just before posting this and it seems to work similarly only with the base to hit total on the table being 0.

The Attack total = d20 + Fighter level/Hit Dice + modifiers + Descending Armour Class.
Look up your attack total on the table and this is your result. A result of 20 is your bog standard "hit", less is a near, complete, or terrible miss and greater than 20 represents increasingly good blows.

"Combat Tricks" mean an additional effect such as:  lose initiative next round, disarmed, tripped, pushed, bum rushed or similar trick as suitable to combat situation and agreed upon by player and DM. You could codify these using 3E’s combat manoeuvres  or play them fast & loose as is your preference. I should clarify that I haven’t ever seen The Challenges System , and the results and margins of success/failure I’ve used are based on Paolo’s hack. Jeff Rients' version seems to be more true to the Challenges version using wounds rather than Combat Tricks to spice up the combat results as per Moldvay's rules.
Posted by Lloyd Neill at 20:37