A quick & dirty review of Wonder and Wickedness 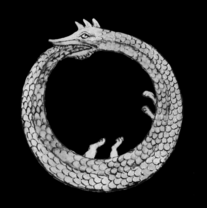 Wonder and Wickedness is an alt magic sourcebook based around level-less spells. It's a nice little A5/digest sized book crammed full of magicky goodness (or wickedness rather) written by Brendan Strejcek of Necropraxis, illustrated by Russ Nicholson and published through Paolo Greco's Lost Pages. The author's stated intent is to provide a collection of "level agnostic" spells that are appropriate for first level characters yet scale such that they remain relevant. Overall he's done a pretty good job of doing just that - one of the main ways this has been done is through leaving spell wordings open to interpretation and DM ruling. Given that most of the spells are based on D&D standards (often appearing in very different dressing) there is familiar footing to draw upon but with flexibility to make (encourage even) case based rulings. There are significant changes to the flavour, consequences and limitations of the spells compared to their original versions and this also helps with balancing the spells as level-less.

A good example of this is the Pyrokinesis spell which is basically a reskinned Fireball:

The sorcerer gains complete control over a fire, and may cause it to grow, shrink, or otherwise change. The fire may be detonated, causing 1d6 damage per sorcerer level to all near the blaze, though this ends the spell.

As you can see it scales well by level (probably better than most in the book actually), is vague as to the area of effect, has extra utility with quite a deal of flexibility for a creative caster, but is also limited by needing the presence of fire. I have a wonderful image of the front rank carrying an extra torch which is flung forward for the sorcerer to detonate. I found that W&W really evoked a similar vibe for me to the old Steve Jackson SORCERY! gamebooks. Now that could just be down to the Russ Nicholson art but I think it's also the limited pool of spells available and the fact that any magic is potentially available to a sorceror (the title for magic users in the book) regardless of level. W&W magic also feels like a force of chaos, something that is risky, unpredictable and undependable, something that warrants fear and suspicion of sorcerors (and not just by NPC's, the party should rightfully be careful about what spells they allow a PC sorceror to cast on them). The inclusion of 12 catastrophes for each spell school goes another step further with this, a number of them have the scope to significantly impact a game world, or at least the PC's little corner of it. There's also 50 unique magical items very much in the same feel, a number of them great plot hooks. The combiination of spells, catastrophes and magic items in the book would form a great base for reimagining the role and perception of magic in a campaign setting.

To read and look at its a gorgeous book - nice fonts and layout and wonderful art. My only lament on the presentation side is that it's not a hardcover, it would look great hard bound in black cloth with the ouroboros on the front embossed in silver.  I understand that Paolo puts together his own books so it's a shame he didn't make this a a purchase option, I would have happily forked out extra. DammitIwantmyblackhardboundwithsilverembossedouroboroscopyandfuckwhilstI'matitIwantvellumpagesandthetexthandscribedbyquillinhumanblood. Ahem. 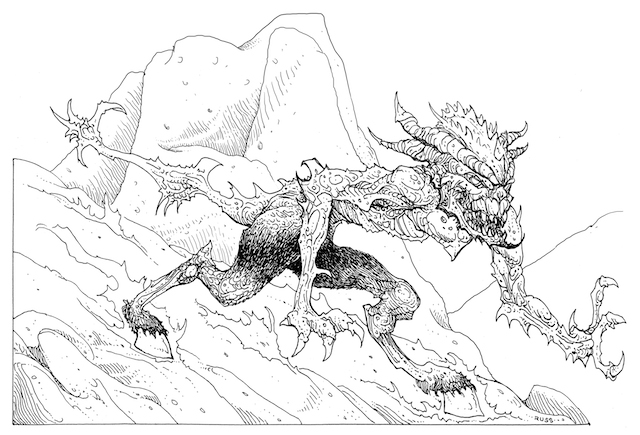 A few other quibbles.

The book doesn't offer any alternatives to standard Vancian casting which I found surprising given the inclusion of spell catastrophes. Certainly the spells are compatible with standard spellcasting, and could be adapted to many other versions of D&D magic, but the authors take on an alternative would've been nice.

I found in a few cases the flexibility and looseness in the spell wordings felt more like ill-defined, serving as little more than a starting point for negotiations at the table of what the effect should be for that game. Again this isn't a biggie, but I would prefer suggestions that I can ignore over fill-in-the-blanks in a published book. For folks that like their spell effects to be clearly defined however this is likely to be a big issue. In fact whilst the spells are in theory transferable to any edition of D&D, the looseness around many of the spell effects will likely be a problem for people not used to a rulings over rules style of play - certainly I would see running combats on a grid as poorly compatible with W&W.

Whilst I really enjoyed the flavour and consequences baked into the spells, in a few instances I found they were perhaps too harsh. For example the Life Channel spell can be used to transfer either youth or vigor (read Hit Points) to a target. When used for healing the spell drains 1 hit point from the caster (or another target if you have a volunteer / victim) and heals from 1 to 6 points. However on a roll of 6 the recipient receives an extra 1d6 points and on a roll of 1 the recipient gets 6 points of healing but at the price of being "permanently changed by the dark magic".  A 1 in 6 chance of boning a PC for the equivalent of a cure light wounds seems like too much, too often, although I guess that very much depends on what the "change" is taken to be, as nothing further is specified. This is something easily decided upon for each game with a little work, ultimately for the better than a proscriptive result, however I still would have loved some suggestions. I guess this represents for me the strengths and weaknesses of W&W - its a wonderful starting point, a goldmine of ideas, and asks (and prompts you to ask) questions about the game you want to play. If you are happy to work with and expand upon this flexibility its a wonderful book, if you are looking for a source of plug & play spells then not so much.

Ok, so should you buy it?

If you are a sucker for a pretty book or reckon you would use it at the table then I'd definitely recommend purchasing the print version, it's small enough to not intrude but a great prop for any sorcerer PC. The majority of the spells can be found on Brendan's blog so if you are curious have a gander. If you like, but not enough to fork out for the book there's a pdf which will give you access to the art, remaining spells and the catastrophes and items. If you are too skint / cheapskate then the spells on the blog are certainly worth yoinking.  I think the ultimate deciding factor is whether you need an alt magic system, and if so are you looking for a toolkit approach to tweak for your game. If so I can't recommend Wonder & Wickedness enough. However if you are just curious or like your rules spelled out in detail checkout the blog and see if it tempts you.